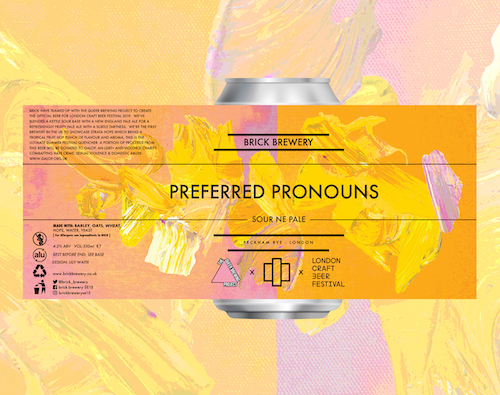 #LCBF19 Beers: In the spirit of collaboration

It’s #InternationalBeerDay! Apparently?! What that actually means we have no idea, but if it’s a reason for the national press to bash out a few listicles, then we’re fully behind it.

All jokes aside, the thing we love about modern beer more than anything is the culture around it, and all the people who drive it forward in so many different directions. Difference and diversity is what makes our world revolve, and is the thing that makes craft beer so special. So if we’re going to shout about anything today, it’s going to be that.

For our festivals we always like to get involved in making a beer or two; special beers that have a good story behind their creation and express a little something about our festivals. So on this hallowed ‘International Beer Day’ we’re excited to tell you about not one, but TWO collaborations that are launching at this year’s LCBF.

First up we’ve ‘Preferred Pronouns’ a tart, juicy pale brewed in collaboration with Brick Brewery, Peckham, and the Queer Brewing Project. This beer means a lot to us as the Queer Brewing Project’s Lily Waite used to be part of our team. Lily’s project is all about raising awareness of LGBTQ people in the beer industry – makers, marketers and drinkers – and uses profits from the beers for charitable purposes. It’s a fantastic idea and continuing to open up beer, to make it accessible to everyone is what we’re all about, so to work with Brick Brewery and Queer Brewing Project has been an honour.

Led by the Brick team we’ve blended a NE Pale, using a very special, first time in the UK ever hop, with their house sour to create the perfect summer festival beer. It’ll be pouring at Brick’s Bar at LCBF, but you’re also very welcome to come down to the launch party at Mother Kelly’s on Wednesday 7th, and check out Lily’s Q&A at The Foodism Tasting Table on Sunday 11th at the festival itself. You can grab a can of Preferred Pronouns from their bottle shop – and be a part of this whole thing yourself!

The next beer is something totally different. This year we started working with Curious Brew, the brewery element of the Chapel Down group – one of the most exciting drinks production projects in Europe. Pioneers of English wine, the guys are now turning their hand to beer, cider and spirits, sharing knowledge, ideas and inspiration amongst their teams to create something truly unique. It’s hugely ambitious and the results so far have been very impressive.

As part of their Great Minds Drink Alike series of collaborations we’re launching a Saison at LCBF (which all VIP Ticket Holders will get a can of). We wanted to make an elegant beer that was both inspired by some of our favourite beers and which pulled on all aspects of what Curious Brew are about. So we brewed a saison to which we added fresh apples and fermented with Chapel Down’s house Bacchus wine yeast – creating something that plays between the lines and pushes the boundary of what English beer is all about.

The beer will get national distribution but will be poured first at their bars at London Craft Beer Festival, and we cannot wait to share it with you.

So there you go, it’s International Beer Day, and for two very special reasons we couldn’t be happier about it!