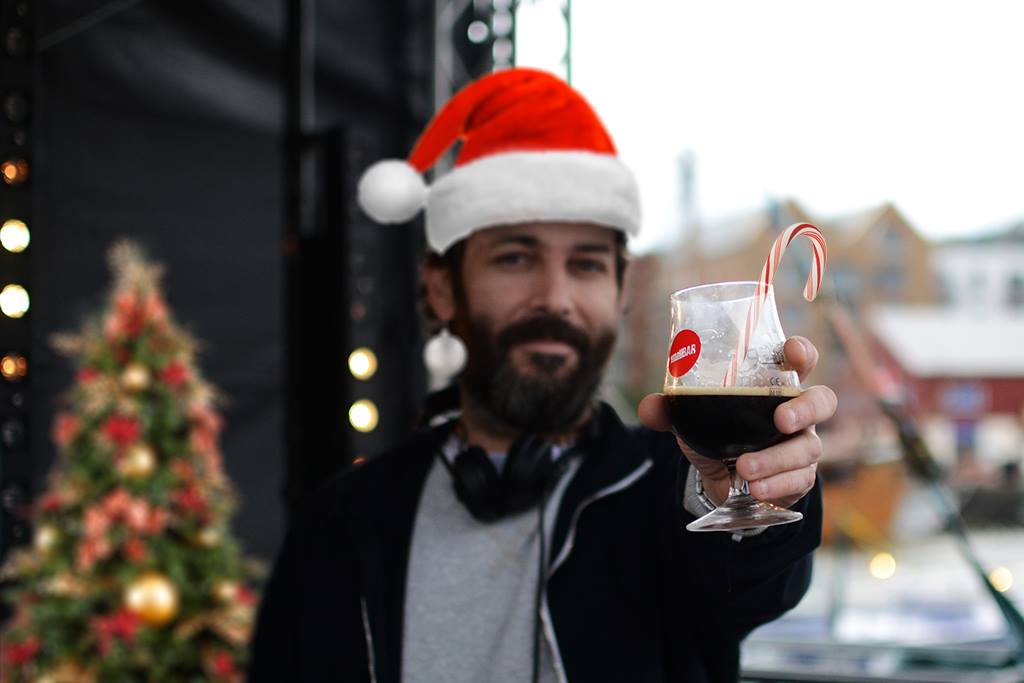 Especially if you like rich beers, cosy pubs, and a little boozy warmth to keep the cold way.

Christmas has always been a merry time in beer. The colder months pair well with strong beers, cosy pubs, and a loosening of the purse strings. The best bit is that Christmas drinking has never been better because, in typically creative fashion, craft breweries have gone ‘full-turkey-with-all-the-trimmings’ on it.

If you could jump in a sleigh and fly around the major metropoles of beer, you’d see the brewery elves are in overdrive and the distribution reindeers are in meltdown. Hands a’trembling, the drinker boys and girls are writing their beery wish lists, hoping they’ve been good enough for Santa to deliver something Instagram worthy on the big day itself.

In celebration of all this, and to highlight some of the festive splendour we’re creating at our very own London Christmas Beer Festival, we decided to take our own imaginary sleigh ride around Europe to visit some friends to see what makes Christmas so special.

When we think of Christmas and beer, we think Denmark. Here, Carlsberg have always released their ‘Juleøl’ to great festive fanfare. Back in the day, thirsty Danes would celebrate as horse drawn carts would deliver the sweet Christmas elixir to the city’s taverns – it was the day the Christmas season began. In true modern consumerist style this day is now called ‘J-Day’; a day Danish brewery Mikkeller’s Mads Snedevind describes as ‘a day everyone is insanely drunk’.Righty-ho-ho-ho!

However, despite J Dayseeming to be Denmark’s answer to Santacon, the traditions it grew out of were inspirational to founder, Mikkel, in making Christmas a big part of the Mikkeller world. As Mads says, ‘we release a series of Christmas beers – some are brand new, some recipes have been brewed since Mikkel’s very early days. The series now includes almost every style you could think of, from more classic styles like ‘Santa’s Little Helper’ (Belgian strong ale), and ‘To From Via’ (a spiced porter) to more experimental styles’.

…to the Scottish oil town of Aberdeen, it’s unsurprising to find things get a touch stronger. For Fierce Beer’s Dave Grant, Christmas beer is all about big stouts, porters, and beer’s best friend, Whisky.‘We basically disgorge as many barrels as possible to get the beers that we have been saving and nurturing out there and into welcoming hands.’

Dave – definitely one of busier elves in beer – continues, ‘it gets pretty cold up here, and it is vital to stay warm – either with extra clothing layers, or with a ‘beer jacket’. Boiler makers are a great way to do this, and pairing beer with Whisky is a fantastic way to spend the festive period’. How good does that sound?

And finally, time to head south to warmer climes…

As Rudolph and Blixen – the designated drivers – zip us over to Gipsy Hill in South London, it’s important to remember Christmas is not all about Imperial Stouts. For Gipsy Hill Brewing’s Sam McMeekin, Christmas really highlights the role a brewery can play in the community; ‘the taproom really shines as a community venue at this time of year. In our wider community we sponsor every school raffle under the sun, and we look at taking part in a lot of smaller community markets too’.

In terms of releases, Gipsy Hill’s main Christmas beer is a Christmas Kriek-style cherry sour, something Sam likes to pair with a sweet tangy mince pie and some solid knitwear. ‘I love food, mood and beer matching, and this time of year is even more perfect for it.’

We’re bringing as much of all this to our London Christmas Beer Festival as the We Are Beer sleigh can fit in. Our festival and market will be perfect to enjoy some of the flavours and vibes we’ve explored with some excellent breweries – Mikkeller and Gipsy Hill are in attendance – and some delicious food and festive music to boot.