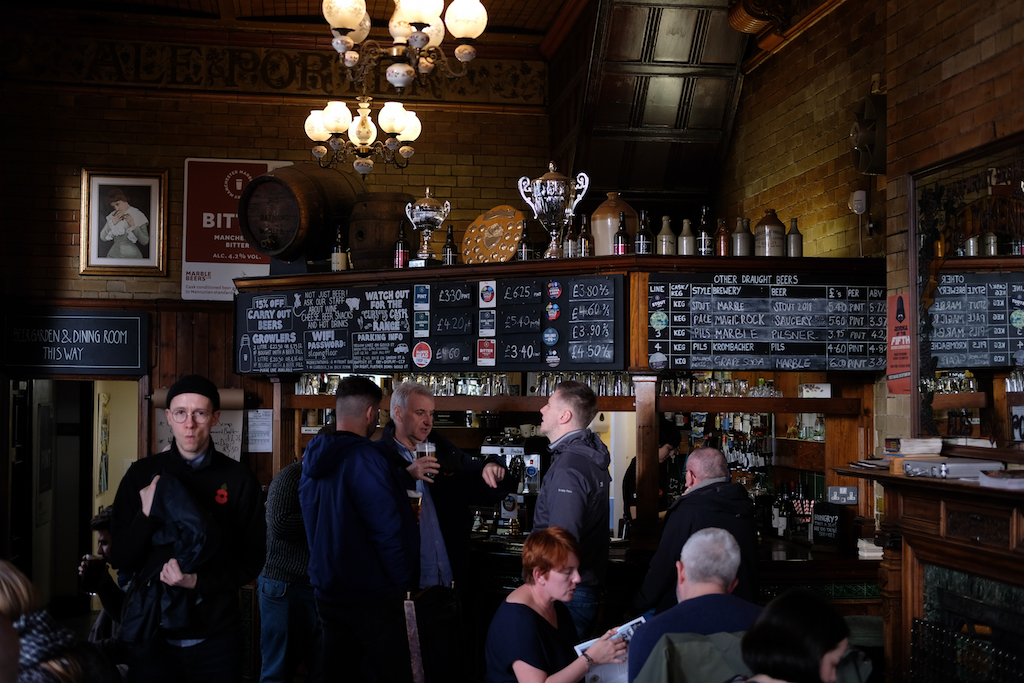 24 Hours In… returns with a tour of one of Britain’s most exciting and dynamic brewing cities, Manchester, from Marble Brewery’s Jan Rogers.

Jan Rogers is the director of Manchester’s Marble Brewery. A veteran of the city’s illustrious brewing scene, Jan has seen the brewery grow, throughout its history spanning twenty years, from an outfit in the back of a pub, to one of the country’s most respected breweries.

“The best tap room I’ve visited is about 35mins outside Manchester by train, but it is well worth it. Magic Rock in Huddersfield nailed it with cask and keg beer, beautiful bar design, comfortable, modern and filled with all sorts of people, from beer geeks to locals.

However,  these taps are also on my list to visit soon as I’ve heard so many good things about them.
Track Brewery Tap: it’s local, serves the much-talked about Sonoma beer and is in a new space in the upper part of Crusader Mill on Chapeltown Street.
Rivington Brewery: the beers are so good and the surroundings look wonderful. Members of the Marble team went during the summer and had the best day out.
Torrside Brewing: I keep hearing so many good things about these folks but not made it to an event there yet.

Honourable mention for a brewery tap is Beer Nouveau—friendly, relaxed and weekly.”

“There are a lot of beer bars in Manchester’s Northern Quarter so I’ve listed some good, but less publicised, outlets to add to people’s beer wanderings in the area: Republic for a modern take on beer and surroundings, the Crown and Kettle for a shabby chic, free house done well, and the Castle for traditional, family brewery vibes brought up to date.

For a shot of old Manchester drinking include bar and the in the Arndale but beware—no pretension allowed.

Outside of the Northern Quarter, try the Brink (with a purchasing radius of 25 miles to keep the beer local) and the Gaslamp (showcasing Pomona Island beers). They’re opposite each other on Bridge Street.”

A Bite to Eat:

“My go-to breakfast, lunch, and tea at the moment Hong Thai in the Arndale south food market—one of Manchester’s secrets for quick, easy, reasonably priced and glorious tasting food. You can watch all of life walk past, while you eat, as well.

Eat and Sweet Caribbean takeaway, tucked inside the Ridelow building on Church Street and Al Faisal on Thomas St are also central and worth a mention for those in search of affordable, good food with no hype attached.”

“I’m not a coffee and cake gourmand but Pollen should be a must on any Manchester trip. The surroundings are lovely and the bread and cakes divine. It gets very busy but you can buy carryout and sit by the canal basin with the ducks and geese (it is Manchester, so this is weather dependent).”

“Band on the Wall has been my live music venue of choice since the . It had a major refurbishment about 10 years ago but is still small, intimate, and hosts the best in reggae and world music, and caters for jazz, blues—in fact, any music taste slightly off the beaten path. It’s well worth a night out.

Royal Exchange Theatre is another venue that I’ve been enjoying since my student days. If you’ve not got time to see a theatre performance, pop in to see the grandeur of the building, stop for a coffee, or a drink and listen to the building. I swear you can hear it breathing—I think it does it to calm you.”