A few weeks ago, in the unlikeliest of locations, an incredibly exciting historical brewing project took place. On a nano-brewery kit tucked behind the bar of Pitt Cue, the most exciting and authentic barbecue restaurant in the capital a stone’s throw from London’s Liverpool Street station, an ancient beer was brought back to life.

Whilst The British Museum might not be the first name that comes to mind when thinking of collaboration brews, it’s thanks to them that this project came into being. When the BM – as it’s fondly known – commissioned renowned food historian Tasha Marks to produce a YouTube series exploring “the cultural backgrounds behind some of our ‘pleasant vices’ – alcohol, sugar, chocolate and aphrodisiacs – in relation to the British Museum’s collection and beyond”, she turned to food and wine expert Susan Boyle, and head brewer Michaela Charles, who runs AlphaBeta Brewery – Pitt Cue’s in-house outfit.

The concept was to respond to an object in the museum’s collection – or in this case, objects. The collection houses a large number of Egyptian beer jars, reed straws, and models, often left as offerings in tombs with the intention of beer being brewed in the afterlife; the artefacts acted as a guide for the team in how to make the beer itself. As well as these, they referred to the ‘Hymn to Ninkasi’ – often credited as the first recording of the brewing process, (1800 BCE) although this hymn in fact came a little while later than the period the team are looking at. Working closely with the bio-data team at the museum, they were able to identify some of the ingredients that would have been used at the time, in order to make sure the end result was authentic as possible. 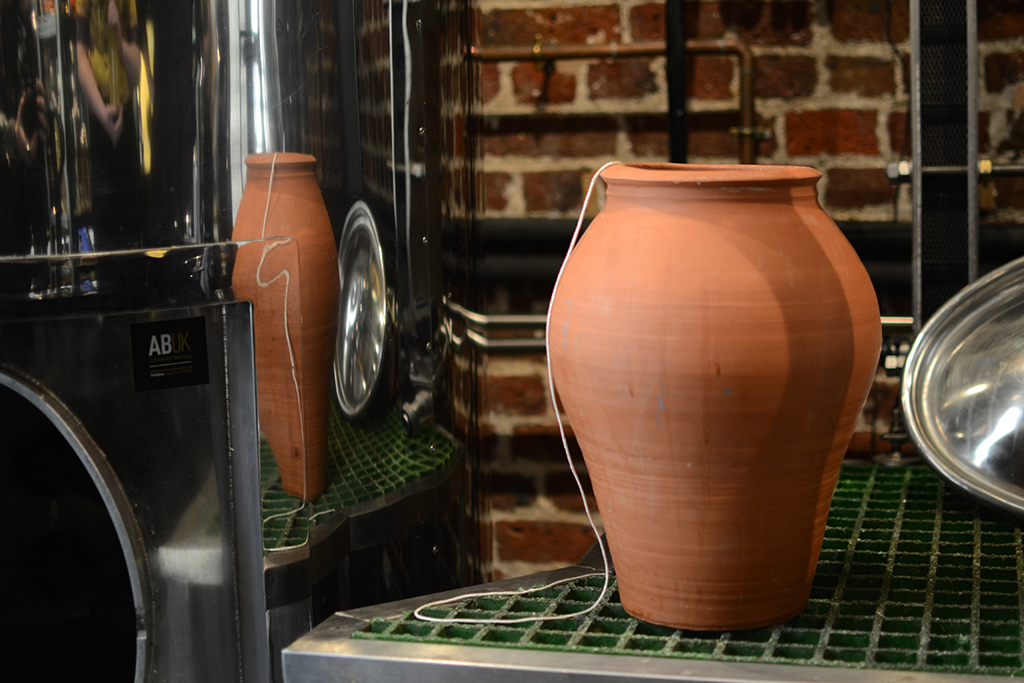 One prevalent idea about ancient and pre-medieval brewing, and the beer itself, is that it was primitive and basic – as Tasha says, “a lot of writings about Ancient Egyptian beer say it’s going to be gruel-like, and thick.” Egyptian hieroglyphics long depicted the drinking of beer through straws; some historians theorised that the beer was a thick, porridge-like mixture that necessitated filtering through straws, and the Hymn for Ninkasi specifically mentions ‘beer bread.’ Tasha thinks that it’s more likely that this was a method for storing barley, not bread as we know it. “When they’ve done chemical analysis on pots in Ancient Egypt, they found a porridge-like slurry, but since these guys have been brewing, we found that that slurry is the residue – it’s not the content.” To further put the idea of somewhat undrinkable beer to bed, Michaela put forward the idea of fermentation pre-dating baking, “because fermentation naturally occurs in nature, and you don’t need anything to start it other than a happy set of coincidences. Baking requires a heat source, and fire.”

Throughout our conversation at Pitt Cue – a bustling and modern restaurant in which it feels almost alien to be ‘uncovering’ ancient brewing history – I find myself continually surprised. Not only does this project show how advanced Ancient Egyptian brewing techniques were, it also undermines certain things within brewing that we often appear to regard as fact. The method that the team used for this brew is significantly more efficient than the way we brew five thousand years later: “even though it seems primitive, it’s super efficient. It works so much better than modern brewing processes; it yields a really high alcohol content, the fermentation happens really quickly, and it yields a delicious beer,” Tasha says. 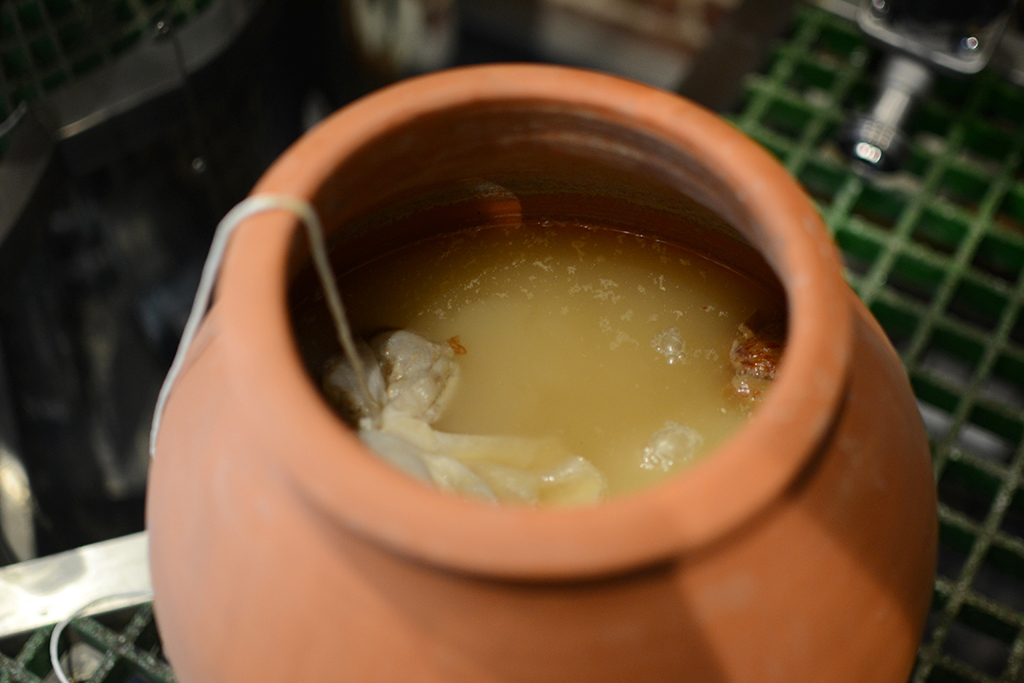 The brew itself is remarkable. As opposed to the average modern-day brew; a single mash infusion, which is boiled, hopped, and fermented, this method uses two mashes. “There’s the cold mash- which gives you all of your live enzymes, and then there’s a hot mash which unravels all of your starches, and the two of these mix together,” explains Michaela. “The starch conversion doesn’t have to happen in a set amount of time – it goes all the way through – and the fermentation starts immediately, because the earthenware vessel has pores in it that hold the yeast. Starch conversion and fermentation are happening together – it’s so quick.” The entirety of the brew takes two days, a time frame unheard of in modern brewing.

“It’s genius, and it’s five thousand years old,” interjects Susan. “It’s full-on extraordinary – it’s exceeded all of our expectations, and all the knowledge that we brought with us – it really has destabilised how I feel about so much that I took as just being the way you have to do things.” One thing that challenges my own perceptions of the brewing process is the lack of the boil. Susan references the Guardian article about AB Inbev coming up with a way to brew beer without boiling, and negative reception it received within the craft beer world: “bringing our knowledge to it, it makes sense – you can make beer without boiling – it’s what they were doing five thousand years ago. This is what we’re doing, and this is what the Ancient Egyptians were doing five thousand years ago; there’s no reason you need to boil. It’s not bollocks at all!”

Brewed with both malted and unmalted Emmer and Einkorn, two ancient grains grown in the Fertile Crescent, a harvested yeast strain that Michaela had used in brews previously, and dukkah, an Egyptian spice blend, the brew is almost alarmingly simple. Hops weren’t cultivated and used in brewing until the medieval period, so none were used here, which makes sense, given the lack of boil. One common idea is that all ancient brewing relied solely on wild yeasts for fermentation. Michaela discredits this: “the vessels found on the brewery sites had an awful lot of yeast in them. They theorise that they must have added yeast as an ingredient; known about it; scooped it from one pot and put it in another – purely because of the volume of it.” 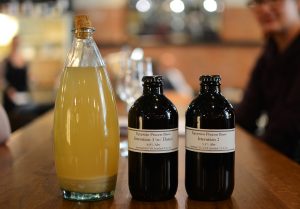 As Tasha pries the crown cap from the first stubby brown bottle – somewhat more fit for a French supermarket beer as opposed to a mind-blowing historical project – a hiss escapes, reaffirming the idea that Ancient Egyptian beer was much closer to our present-day iterations than once thought. The beer is surprisingly bright, with just a hint of haze – reminiscent of an unfiltered Gose – and a pale straw colour. The head dissipates fairly quickly, though the carbonation from the continuing fermentation forms a halo within the glass. Not knowing what to expect, I take my first sip.

When I first read about the project, and Tasha sent me some preliminary information, I was imagining the final beer being somewhat musty, or dull, at the very least. I certainly didn’t expect it to taste as it did: a delicious, slightly tart beer with hints of wheat and spice, with a refreshing crispness to it. With an acidity not unlike wine or cider, the beer evoked thoughts of summer refreshment – ideal for the heat of Egypt. There’s a hint of funk from the yeast profile, though nothing overt – you have to actively look for it – and there are no off flavours. Given that this is a beer brewed from a recipe that’s several millennia old, and with five thousand-year-old techniques, brewed using only ‘a dirty pot’ and minimal human interference, it’s incredible. 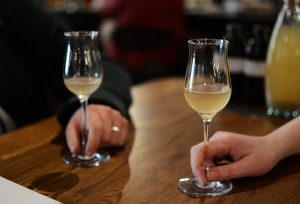 This wonderfully simple project surprised even the team behind it. “I was very sceptical. When I first approached this project I thought ‘this is going to be nasty!’” Tasha admits. A world away from pots of boozy sludge, the Ancient Egyptians brewed delicious beer: “it’s a classy brew, even by modern palate standards.” As Susan says, it really challenged everything I knew about brewing. Things I once thought to be somewhat set in stone were undermined by an ancient hymn, some experimentation, and a little faith; a recipe from a time before we often regard beer to have originated has shown how simple beer can actually be, and how delicious, refreshing beer is not as modern an innovation as we once thought.

Rather stunned, I immediately wanted to try and bring my own bit of Ancient Egypt to life; I just needed my own terracotta pot.

You can watch the British Museum’s Pleasant Vices episode on the beer here. Thanks to Tasha Marks, Michaela Charles, and Susan Boyle.